7 things that grabbed our attention on Prime Day 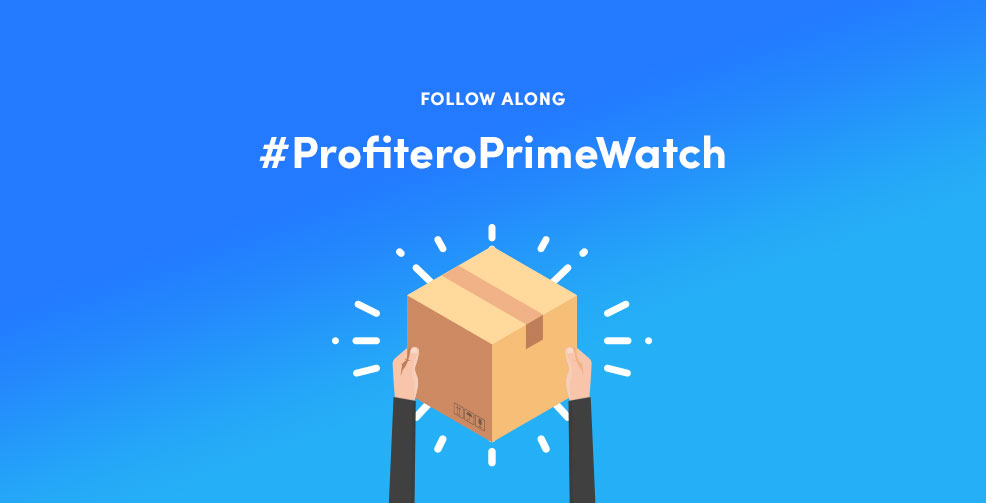 Delivered as promised? Well, maybe not so much. Unfortunately for Amazon, instead of great deals, the talk of the town was the untimely site crash that plagued the U.S. just as the event got underway. Shoppers nationwide were stuck in endless loops, staring at “something went wrong” messages, and seeing dogs everywhere (you know exactly what we mean!).

Despite the technical glitches, Amazon’s 4th annual Prime Day was touted as bigger and broader than ever. In fact, Amazon said customers ordered more in the first hour of Prime Day in the U.S. compared with the first hour a year ago, as reported by Internet Retailer.

Packing 36 hours (up from 30 last year) and millions of promotions into the event, not only did Amazon kick off the Prime Day hype nearly two weeks in advance — e.g., its $100 off Amazon Echo Show deal started on July 3 — but it expanded into new geographies as well. Australia, Luxembourg, the Netherlands and Singapore joined the Prime Day festivities for the first time this year, making a grand total of 17 countries participating in 2018.

Profitero’s global team of expert analysts covered the mid-year sales extravaganza every step of the way. Here’s a recap of the biggest highlights we observed from Prime Day 2018:

As anticipated, Amazon clearly positioned its own brands to win on Prime Day. While there were great deals to be had on the usual suspects — i.e., Amazon devices like Amazon Echo, Echo Dot and Fire TV Stick — the retailer took advantage of the extra traffic being driven to its site to cross-merchandise and promote its broader brand portfolio.

Sitewide, we found that even when a promotion was for a national consumer packaged goods brand, banner ads for Amazon private label goods typically took front and center. Across promoted Baby products there were banner ads for Amazon Basics and Amazon Home Services. In beauty, ads for Amazon’s own labels Solimo in HBC, Amazon Essentials basic apparel and Presto! household goods were prominently placed.

Nope not another site jab, but a reflection of how well Amazon’s relatively new pet supplies brand WAG performed during Prime Day. Our research found WAG dog food rocketing up the best seller ranks following a 30% discount on all 5 lb. bags — an ingenious way to generate product trial. By 2pm EDT on Tuesday, Amazon owned the “Amazon’s Choice” badge for “Dog Food.”

This category example is testimony to just how serious Amazon is about (1) launching and growing its private brands, but also (2) increasingly penetrating some of the highest velocity, highest penetration categories in the consumables space. 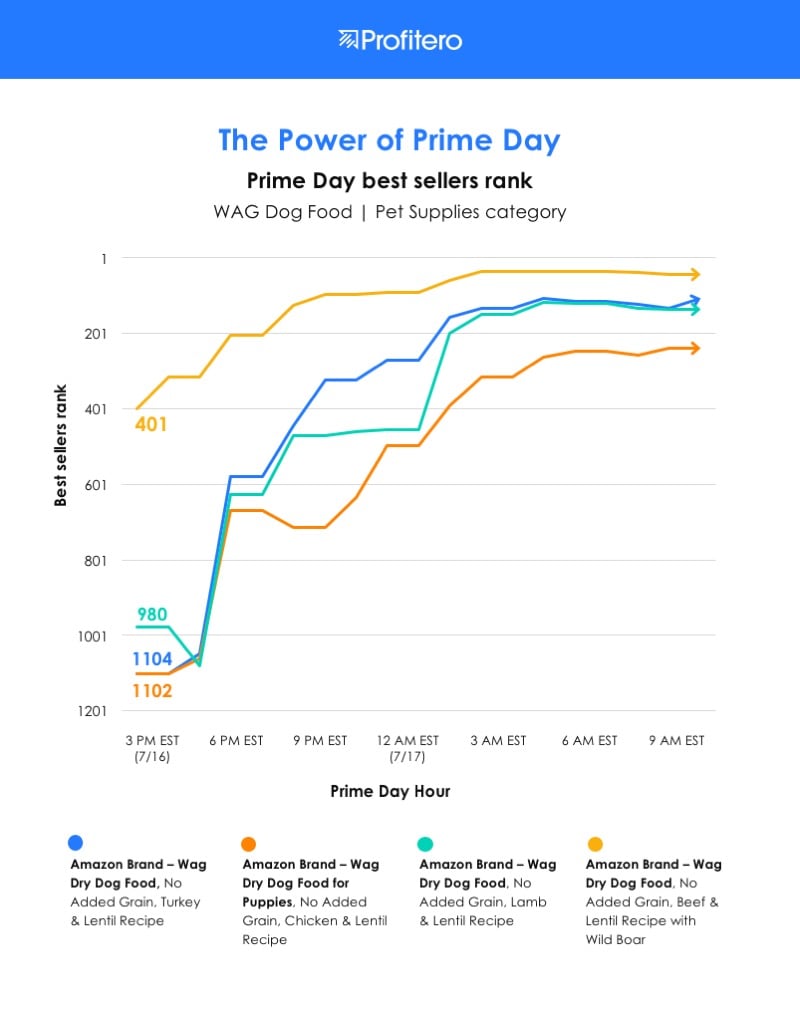 For more category, product and brand examples and insights, be sure to register for Profitero’s webinar on August 16: Prime Day 2018 recap: Who were the big winners & what promotional vehicles worked best.

Prime Day is a day for small brands to shine on Amazon. As an example, in the UK, we saw a lesser known Rhubarb and Ginger Liqueur from Edinburgh Gin rise to #2 in the Grocery Best Seller ranks on Amazon UK, ahead of much larger mainstream brands. This is a clear indication that smaller brands can and frequently do outperform on Amazon, and not just on Prime Day.

For more on how small brands often win online, read our previous post: Bigger is Not Always Better.

The combination of Amazon-owned private labels and small, emerging brands moving up the Best Seller ranks on Prime Day should raise a red flag for bigger brands that decided to sit out the event. We found some products that weren’t being promoted on Prime Day actually losing position in some highly promoted categories, like Bluetooth speakers in electronics. While top products tended to remain on Page 1, lower-velocity SKUs got swept to Page 2, 3 or further down. 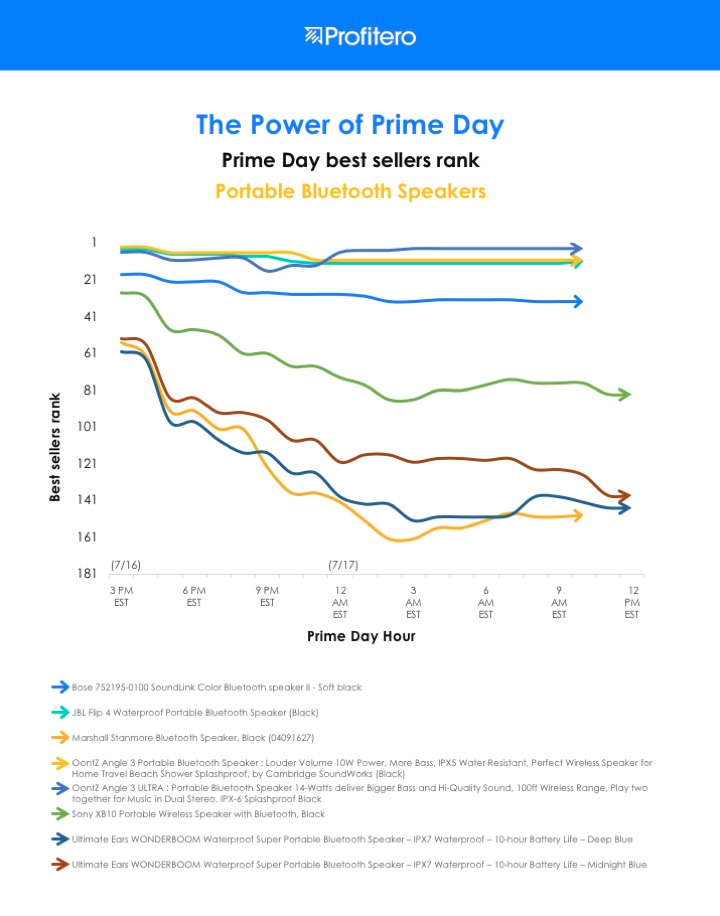 5. Grocery gets the green light

On Prime Day, some grocery items were…. free? Such was the case with General Mills Honey Nut Cheerios. U.S. Prime members could snap up a family size box on Tuesday absolutely free of charge. For Amazon, this level of promotion is designed to drive Pantry adoption. Brands likely view the giveaway as an opportunity for product trial with the hopes of creating repeat purchasers.

We must give a nod to Amazon’s growing physical presence, taking strides to make Prime Day truly an omnichannel event in 2018 by bringing Whole Foods into the fold. Not only did the retailer extend some of its hottest deals into the brick & mortar space, it created entirely new ones too — along with significant buzz. The whole idea: extend the value of Prime Membership to the physical store setting as well as entice Whole Foods shoppers to join Prime.

A mid-summer shopping event originally intended to boost Prime membership (now 100+ million strong globally), other retailers also have found it beneficial to jump on the Prime Day bandwagon. A growing host of competitors — including Walmart, Target, Macy’s, Rakuten, among others — are now piggybacking off the event, advertising significant sales events of their own to try and put a dent in Prime Day.

Macy’s hosted what it dubbed “Black Friday in July” during the week leading up to Prime Day. Target took to Twitter to announce a huge — and apparently “hot, hot, hot” — one-day sale on Tuesday, July 17. Not to be outdone by the plethora of Amazon device deals, Best Buy had a Google Home event of its own. And Office Depot had its pithy rebuttal to Amazon’s outage, sending an email to customers that simply read, “Tired of looking at dogs? Our deals are still up.” Interestingly, we didn’t see any major brick & mortar grocers get in on the act to counter the Whole Foods promotion.

Tune into Profitero’s upcoming webinar on August 16: Prime Day 2018 recap: Who were the big winners & what promotional vehicles worked best for in-depth analyses and insights of what worked & what didn’t across categories, brands, promotions and countries.

What better way to start thinking about and planning for the rapidly approaching make-or-break holiday season?

From headlines to shopping baskets: How U.K. consumers responded to changing C-19 restrictions in 2020

Seasonal Survival Checklist: 10 Tips to Prepare for Cyber 5 and Other Promotional Events