Evolution in Electronics: The Growth of Amazon-Owned Products 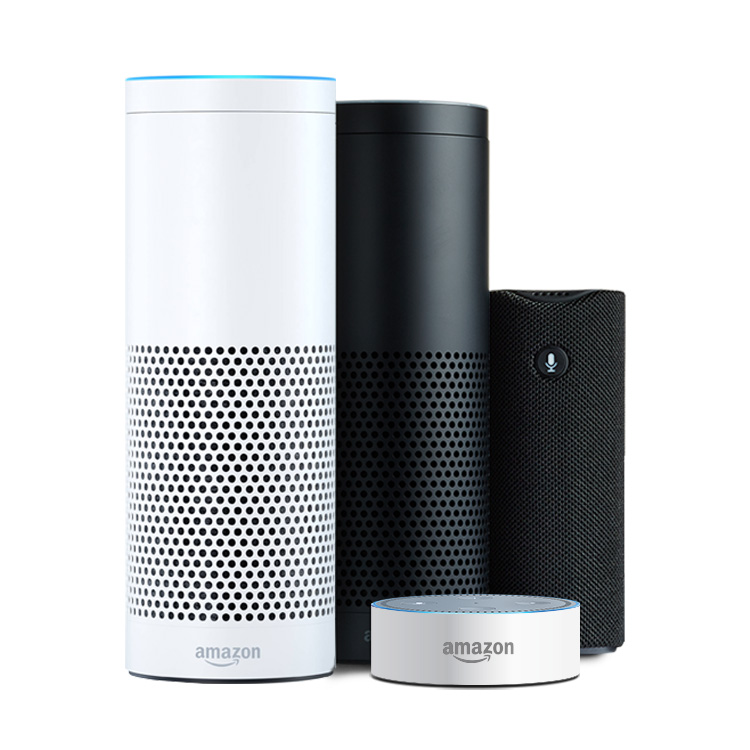 In the run-up to Black Friday 2016 and throughout the peak holiday shopping season last year, Amazon heavily promoted its own line of electronics products on the Amazon.com homepage – a valuable, and perhaps unfair, advantage given that more than half of all product searches now begin on Amazon.

The advertising of Amazon devices hasn’t been limited to its homepage. According to MediaRadar, Amazon spent more than any brick-and-mortar retailer on TV ads during October and November 2016 ($135 million), placing ads around Amazon Prime and Amazon devices. The commercials featured a priest and an imam having tea, and a series of 10 seconds “Alexa Moments” ads for their Alexa powered devices, inspired by real life user stories.

Such prominent placements for Amazon devices, as well as its Black Friday deals (Amazon’s Echo was reduced by $40 to $139.99), clearly had a positive impact on sales. Amazon reported that its Echo Dot smart speaker was the top seller for the 2016 holiday season on Amazon.com, with the Fire TV Stick media streamer, Fire tablet, and standard Echo speaker following closely behind.

We look at the growth of Amazon devices in Amazon.com’s Top 100 Best Sellers for the Electronics category over a 6 month period (August 2016-January 2017), and how consumer reviews have also helped to fuel sales.

According to Profitero’s FastMovers reports*, which monitor and benchmark Amazon’s top 100 sellers across key categories such as Grocery, Health & Personal care and Electronics, the number of Amazon-owned products in the Electronics category has steadily increased over the last six months, reaching its peak in November 2016 with 35 products making the top 100 Best Sellers list for the category (compared with 25 products that made the list in August 2016 – and 21 products in November 2015). 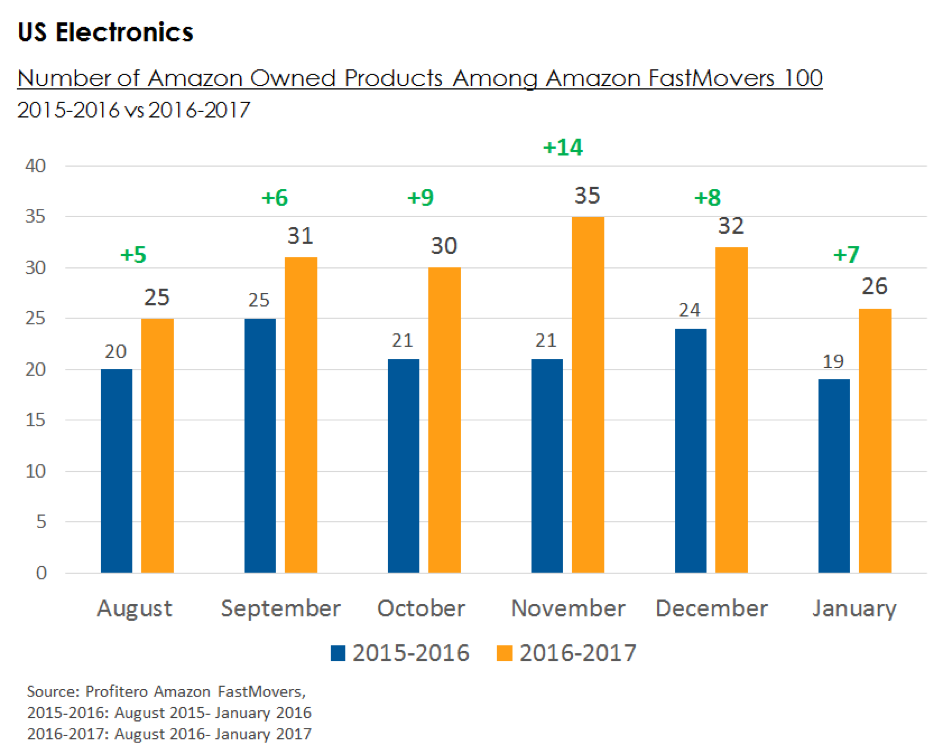 When we analyzed the concentration of Amazon-owned products in the Top 10 Best Sellers for the Electronics category on Amazon.com, December 2016 was all about Amazon: every product in the Top 10 list was owned by Amazon. 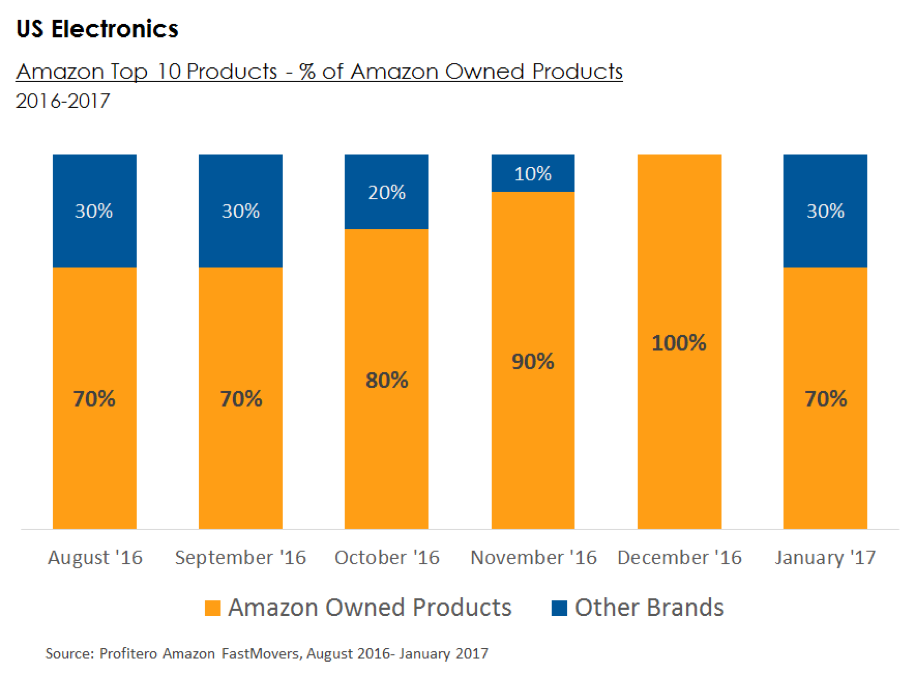 Amazon has continued to dominate the Electronics Top 100 Best Sellers list into January 2017, with 26 Amazon products appearing – more than double the number of products that appear for Amazon’s next closest competitor in the category, Fujifilm, which features 12 products in the Top 100 list.

Amazon Understands the Power of Reviews

Consumer reviews are known to have a direct impact on sales, enabling shoppers to find out more about a product and other people’s experience before buying – of particular importance for higher-priced ticket items like Electronics.

In the Electronics category on Amazon.com, the reviews for Amazon devices have more than doubled year-over-year and receive almost three times more reviews per product (49,662) than the next brand Arris (17,375) – and significantly higher than the category average of 15,503 reviews. 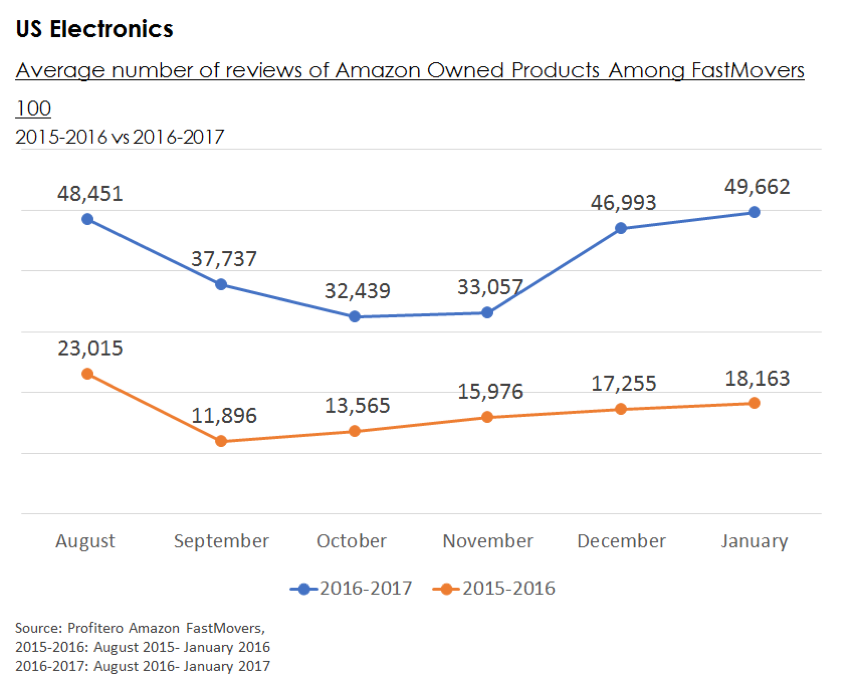 Brands with the highest average number of reviews by product

It’s clear that Amazon devices are a strategic move to retain and drive more members into the Amazon ecosystem. Amazon has turned Prime from a delivery subscription into an entertainment and a shopping must-have, where consumers can stream video, listen to music and use Amazon’s photo cloud service.  With Amazon devices, consumers can now shop and consume media provided by Amazon as well.

No surprise that these devices are “Even better with Prime”: consumers get the full device capabilities, like streaming movies from Amazon video, or ordering Alexa to play your favorite song, when you are a Prime member. With all these perks, it becomes harder for a device owner and Prime member to leave the Amazon ecosystem.

Amazon has good reason to keep pushing its consumer electronics and making Amazon Prime something more than just a free delivery service.  Together they can ultimately increase a customer’s lifetime value.

Only time will tell if Amazon will win the race for consumer devices, but based on the continued popularity of devices like the Echo, Amazon is well placed to continue its Electronics dominance throughout 2017.

*Amazon FastMovers methodology: In each country, Amazon updates its 100 best-selling products in each category hourly. Profitero monitors these bestsellers lists in the US daily and analyzes products’ performance over specific time periods to produce a cumulative ranking of best-selling products.

Subscribe to our free Amazon FastMovers reports to monitor the best-performing brands across key categories on Amazon.

LEGO, Amazon and Nintendo Top the Most Wished For Lists Ahead of the Holidays