As the new school year begins, parents have been rushing to pick up the supplies that students need in the classroom—such as notebooks, pencils, new clothes and the latest tech gadgets. But as Nielsen reports, parents are also browsing the grocery aisles to decide what their kids are eating before and during the school day.

A recent Nielsen survey revealed that 64% of consumers are making a concerted effort to buy healthier foods. And for parents (with children under 18) this means taking their kids’ health into their own hands during the school year. While parents who participated in a Nielsen survey are optimistic that school meals are healthier than they were five years ago, opinions are still mixed when it comes to the health of the meals served in schools. So before parents send their kids off to the classroom, they’re shifting their shopping habits for meals and snacks made at home.

So what’s on the plate…or in the bowl…every morning? According to Nielsen Homescan data, households with children aged 6-12 spend 45% more on kids cereal than total U.S. households and are the primary drivers of total cereal sales in the country. But brands shouldn’t just focus on parents browsing the aisles—seven in 10 parents say their kids ask for items from the cereal aisle while accompanying their parents at the grocery store.

While cereal is a staple for families year-round, certain food items over-index during the back-to-school season (early July through the end of September) compared to the rest of the year. Parents spend more on eggs, yogurt, breakfast meats and toaster pastries, among other items, to get their kids ready for the classroom.

Lunch time offers kids a break from the books—and a chance for parents to decide what goes in their children’s lunchboxes. Despite 44% of respondents reporting improvements in school cafeteria meals within the last five years, more than half of parents opt to pack a lunch. Forty-one percent of consumers want to set good examples for their families, which starts by eating healthier. And regardless of price, 55% of consumers are willing to pay more if it equals a healthier choice.

But what consumers perceive as healthy options can shift. For example, cereal bars have long been considered wholesome snacks. However, these items have declined in sales in the last year in favor of fresh items like tems such as fruit, produce snacks and yogurts.

WHAT’S IN A SNACK?

When it comes to snacks, parents take a varied approach: 34% of respondents say they make their kids snacks from scratch, while 39% do not. However, whether snacking from scratch or not, 58% of parents believe they are packing healthy snacks for the school day.

The surge in healthy snacking across America is making its way into lunch boxes. Four in 10 parents deny requests for snacks containing high-fructose corn syrup content (39%) and artificial ingredients (35%) when children accompany parents during shopping trips. This paves the way for snacks with healthier attributes, such as produce snacks, yogurt and peanut butter. Parents are most likely to be swayed to purchase food items with the claims that they are made with fruits and vegetables (62%), high in fiber (57%), natural flavors (55%), low sodium (52%) and low sugar/sugar free (51%). 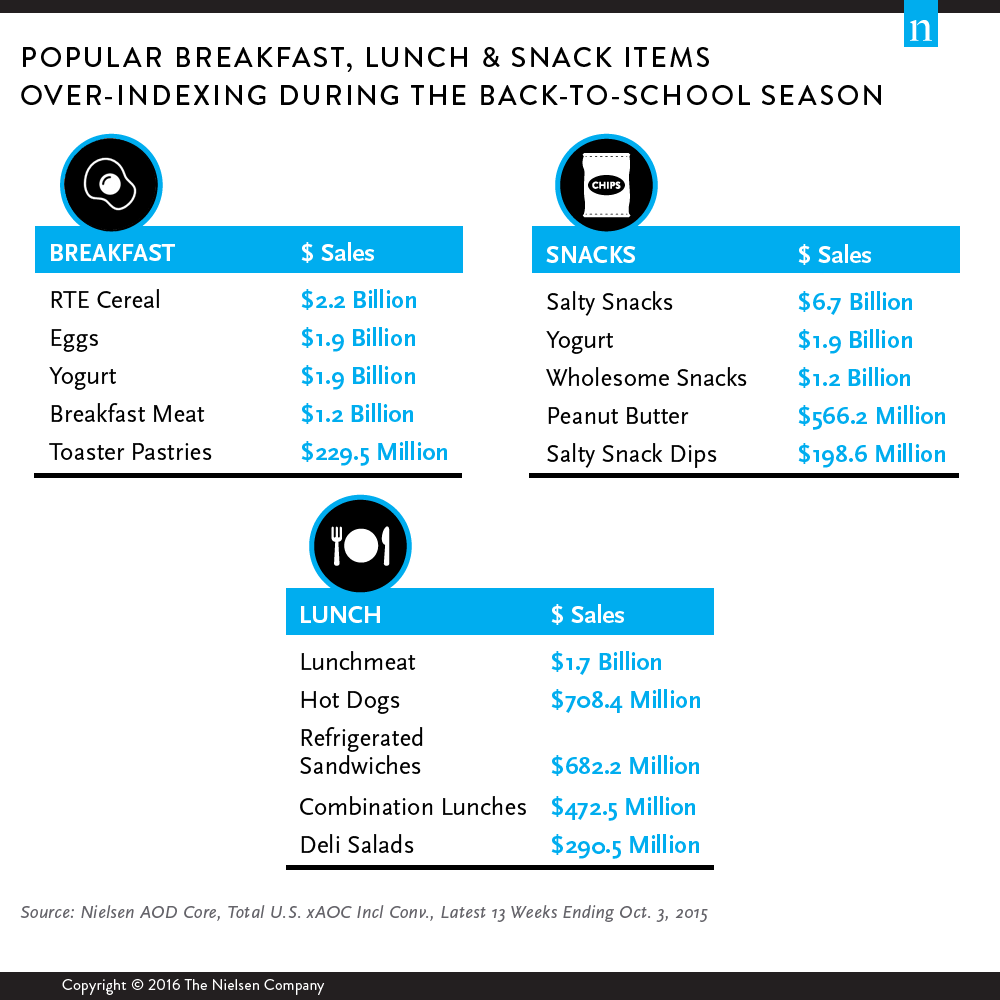 To stay up-to-date with the latest eCommerce news and insights, you might also be interested in signing up to Profitero’s weekly Digital Shelf Digest.