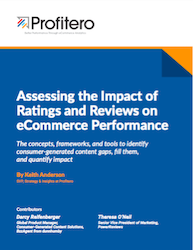 The number of online reviews a product has directly correlates with its sales performance, even if some of the reviews are negative – according to a new report from Profitero, with input from dunnhumby’s BzzAgent and PowerReviews.

“The number of reviews a product has really matters,” explains the report’s author Profitero SVP of Strategy & Insights Keith Anderson.  “The best-selling products in a category – those in the top 10 – each tend to have more reviews than products among the top 100 in the category as a whole – many with double or triple the number of reviews.”

On Amazon US, this is particularly marked in the small appliances, grocery and dog food categories; on Amazon UK, this trend is most prevalent in the chocolate, skin care and baby categories. 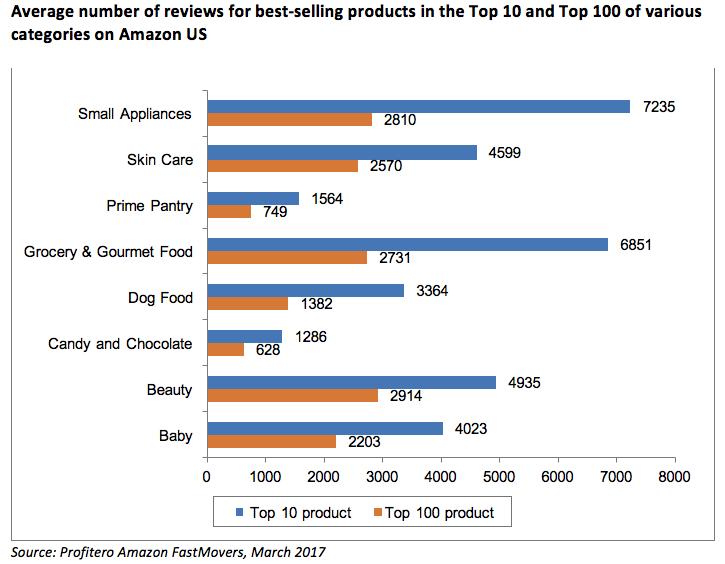 When a product goes from having no reviews to at least one review, that product receives an average 108% traffic lift and a 65% increase in conversion rate, according to PowerReviews.

The report highlights a study pointing to a sweet spot for the number of reviews a product should have as being around the 35-50 mark.  “We see diminishing returns after generating the initial critical mass of around 50 reviews,” explains Darcy Reifenberger, global product manager at dunnhumby’s BzzAgent.  “Once you have 50, it’s better to move support to the next product in the portfolio.  The value of reviews also tends to come from not building them in one fell swoop. If brands need to encourage reviews, they should do so on an ongoing basis through ‘refresh’ campaigns using well-managed sampling.”

Brands and retailers that don’t feature ratings and reviews on their site risk losing shoppers to sites that do. Research on the path to purchase shows that nearly half of shoppers will turn to a search engine if there aren’t reviews – or aren’t enough reviews – for a product on a brand or retailer site, according to PowerReviews. Some 25% are likely to head to Amazon to find reviews, and 20% will leave for another brand or retailer site.

As well as analyzing user reviews, the report looks at the effect of star ratings.  Profitero’s research finds that on Amazon US, the top 100 best sellers have a star rating between 4.2 and 4.6 on average.  This supports observations in the report that shoppers are more likely to purchase a product with an average star rating between 4.2 and 4.5 than one with a perfect 5-star rating. What’s more, four out of five shoppers specifically seek out negative reviews.

Anderson adds: “When it comes to competing online, benchmarking to the competition is critical. Profitero’s Digital Shelf 360 platform identifies products with sub-optimal ratings, new negative ratings or too few reviews relative to the competition.”

The report, Assessing the Impact of Ratings and Reviews on eCommerce Performance can be downloaded here.

Why Ratings and Reviews Matter