With Black Friday and Cyber Monday over for another year, the final holiday stretch of 2016 is well underway. With decorations up, presents appearing under the trees, holiday music on the airways and classic TV movies on the screen, it is hard to look around and not see signs of the holiday season.

But many may have seen the signs of the holiday season well before now. Despite 39% of consumers saying the holiday season starts on Thanksgiving, the holidays have been creeping up on shoppers months ahead of Turkey Day in recent years. In fact, according to Nielsen Sample Store Auditing data, holiday in-store promotions started as early as September 14th in 2015.

Consumers are starting their holiday preparations earlier as well. As of early September 2016, 24% of consumers had already started shopping for friends and loved ones, compared with 23% in 2015 and 22% in 2014. Two groups in particular are leading the charge to get started on their naughty and nice shopping lists: young shoppers and shoppers with many on their lists! This year, 30% of Millennials had started their shopping in early September, compared with just 16% of the Greatest Generation. Larger households also got started earlier, with 31% of households with five or more members and 29% of households with three to four members starting on their lists by mid-October, compared with 23% of two-member and only 16% of one-person households. 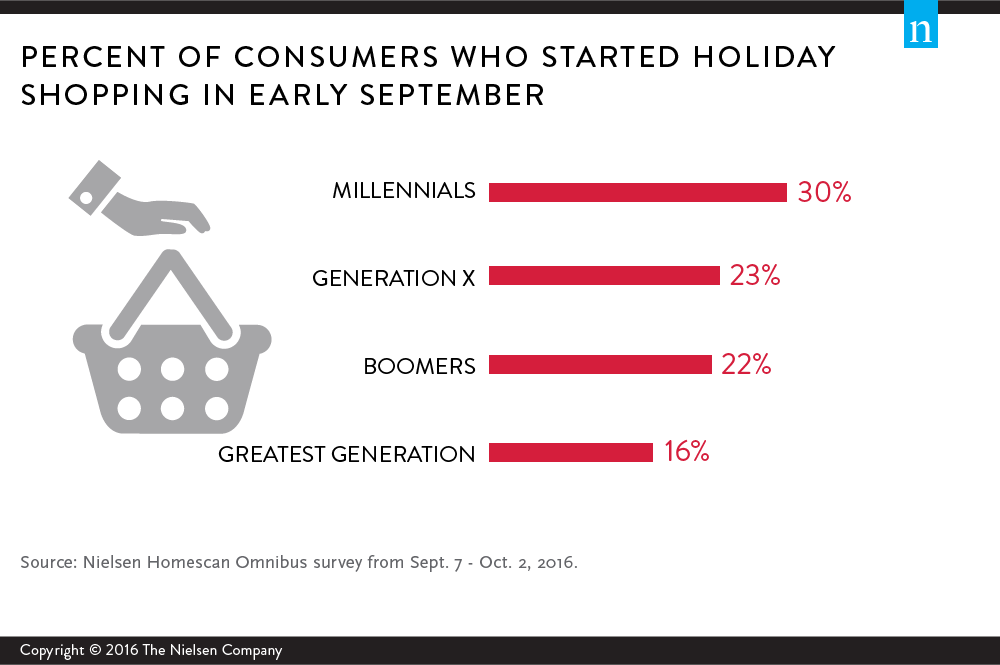 For early shoppers looking to get in the holiday mood, radio DJs are helping listeners get a head start with festive songs. According to BDSradio, a Cincinnati-based Christian AC station was the first station to make the switch to all holiday music this year when it played Ray Conniff’s 1962 release of “Ring Christmas Bells” on Nov. 2, 2016.

With the holidays creeping up earlier every year, consumers are hunting for just the right gift before the leaves have started to change color on the trees. However, many consumers are still searching for that perfect gift: as of Nov. 23, 2016, only 65% of consumers reported having started their shopping. Retailers, manufacturers and marketers should align their strategies to ensure they are reaching shoppers before, as well as during, the holiday season.

The insights in this article were derived from:

To stay up-to-date on the latest eCommerce news and trends this holiday season, you might also be interested in signing up to Profitero’s weekly Digital Shelf Digest.

U.S. grocery sales up in 2021, with more sales shifting online

Brandless: A New Model for Online Grocery and CPG eCommerce?

Ready for the Future? 3 CPG Trends to Watch