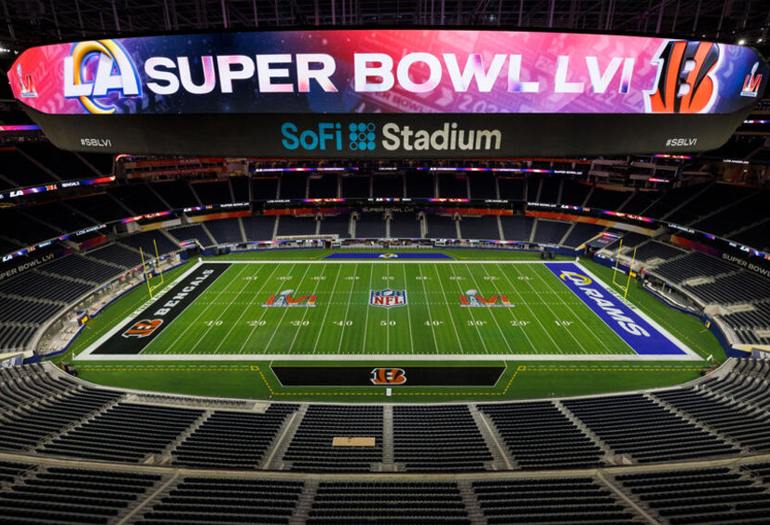 In the old days, you watched a Super Bowl ad and unless the brand offered a Twitter sweepstakes or specific call to action, the journey stopped there. But thanks to digital commerce, the journey from ad to action is quicker and more direct. In seconds of seeing a Super Bowl ad, consumers can search on Amazon or Walmart.com, learn more about the brand and product, and have it on their doorsteps by the next day.

In theory, this makes the return-on-investment of Super Bowl advertising stronger than it’s ever been before. But what happens when competitors “intercept” your Super Bowl brand traffic and use it to call attention to their own brands and products on retailer websites, instead of yours?

Many savvy brands did just that during this year’s Super Bowl. Instead of paying millions of dollars for 30 or 60 seconds of national air time, they spent a fraction of that on banner ads and sponsored search results to conquest the brand names of Super Bowl advertisers.

We examined 20 consumer packaged goods (CPG) brands who advertised during this year’s game between 6pm and 10pm ET. Online product pages and search results were monitored using top search terms across Amazon, Instacart, and Walmart. Each brand was then rated based on a Brand Interception Index to determine who did the best (and worst) job defending their brands from competitor ads. 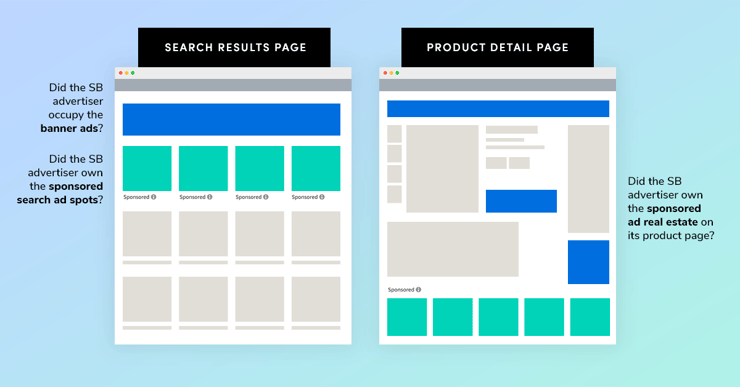 We witnessed 6,548 instances of brands attempting to intercept competitor brands on Amazon, Instacart, and Walmart.com during the course of the game.

They may not have had a splashy TV ad, but Modelo and Corona would have been hard to miss when shopping online for Stella Artois, Michelob Ultra, and other AB InBev products. We found 304 instances where Modelo and Corona (Constellation Brands) intercepted AB InBev by placing an advertisement on a key search term or product page. 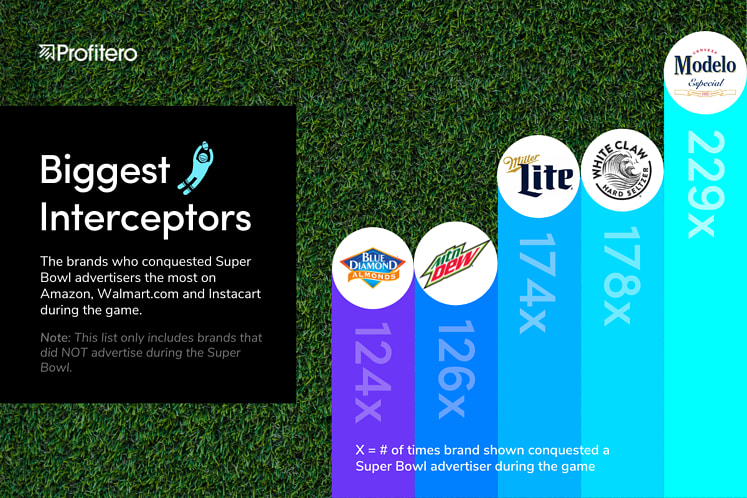 There were other instances where brands had to adjust on the fly. Planters started the game off strong by defending its search terms and product detail pages (PDP), but Blue Diamond made adjustments at halftime and doubled its sponsorship spots after Planters ad ran. Blue Diamond attempted to intercept Planters 119 times, however Planters fended off the charge and ended the night with 10% more ads than its competitor.

One of the smart steals of the game was by Coors who conquested Michelob's organic beer ad on Instacart, creating awareness for its own organic offering without the $7 million spent on TV advertising. 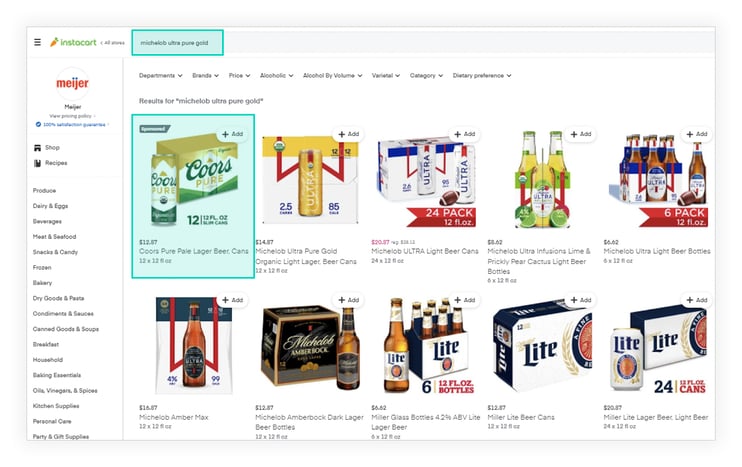 What was both surprising and interesting was that oftentimes the brands conquesting each other were owned by the same parent company, which meant brands were in an ad bidding war with themselves. PepsiCo was the biggest offender, with more than 60% of sponsorship space for Doritos and 32% of sponsorship space for Cheetos was being conquested by another PepsiCo brand. Lays intercepted Cheetos 102 times, Cheetos intercepted Doritos 57 times, and Frito-Lay intercepted Cheetos 45 times. 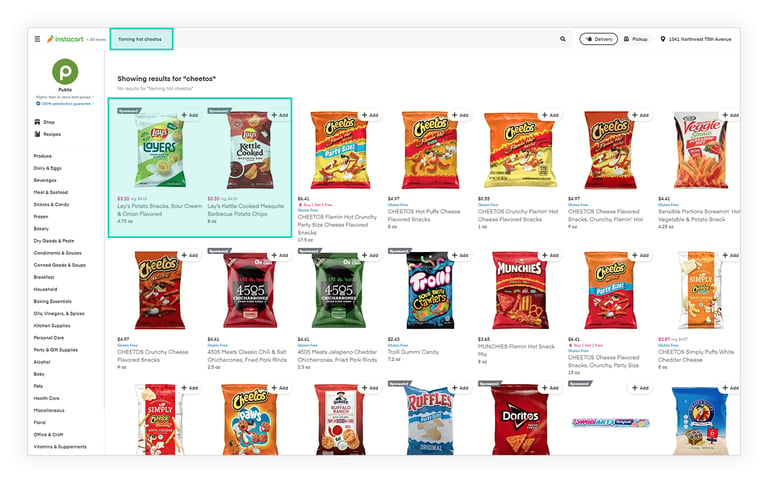 Here are the companies that did the best job defending their brand terms: 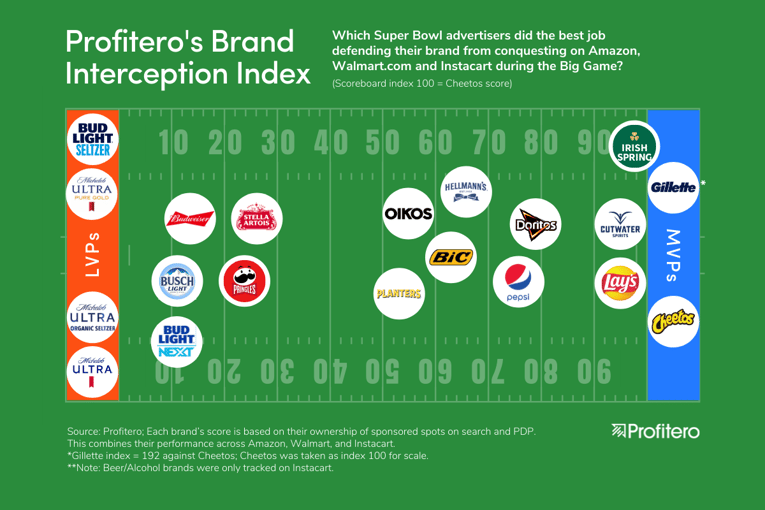 These are the companies that need to do better at defending their brand terms:

Profitero monitored 20 products on Amazon, Instacart, and Walmart.com (desktop), where available, in four major U.S. markets – Chicago, Los Angeles, Miami, and New York City – between 6pm and 10pm ET on February 13, 2022. For Instacart, Profitero chose the largest grocery chains in each region: Meijer in Chicago, Albertsons in Los Angeles, Publix in Miami, and Stop & Shop in New York. Search results and product pages were monitored at the start of the game, at halftime, and at the conclusion of the game.

Brands were rated using a scoring system called the Brand Interception Index that measures how each Super Bowl advertiser did at defending their brands from being intercepted by competitor ads in retailer search results and on product pages.

Search keywords included the exact brand and/or product being advertised in the Super Bowl, plus four additional variations that were determined to be popular variations of the brand or product being advertised and/or common misspellings. A total of 5 keywords were included for each brand advertised. The first five sponsored or organic products that appeared in search results on each retailer from the relevant keywords were selected when examining product pages.

Your brand guide to the latest updates on Walmart's website

More retailers roll out Buy Now Pay Later options in time for the holidays: What brands need to know