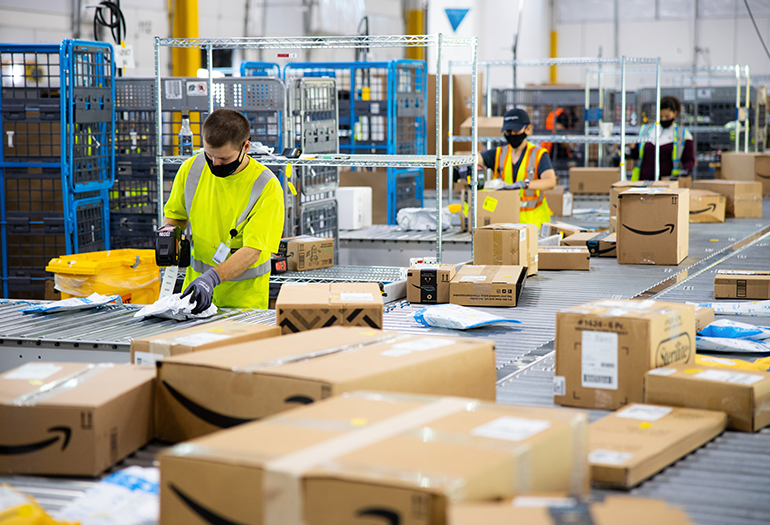 After all the prepping, planning and promoting, Prime Day 2021 is now in the books. And it seemed to go off without a hitch, despite some concerns regarding ongoing supply chain issues and potential inventory shortages.

Here are our observations from Prime Day 2021:

Amazon spotlights its own brands

The industry is used to steep discounts on Amazon devices dominating Prime Day. Sure, all the devices were promoted — from the 4th gen Echo Dot to Ring doorbells, and every Alexa-enabled device in between.

But this year, it looked like Amazon took a slightly different tack. There seemed to be a more concerted effort to promote the retailer’s other non-electronics brands. In fact, even the main Prime Day navigation bar featured separate icons for “Amazon Devices” vs. “Amazon Brands.”

Profitero’s analysis of the biggest gainers in sales rank on Prime Day found Amazon’s own brands heavily represented on some of the “top 25” category lists.

Amazon is making a hard play to have another successful (and likely “record breaking”) Prime Day again this year. We’ve noticed an extraordinary amount of activity happening off Amazon, across the press and media — both major business publications as well as consumer dailies on both sides of the pond — to hype Prime Day. 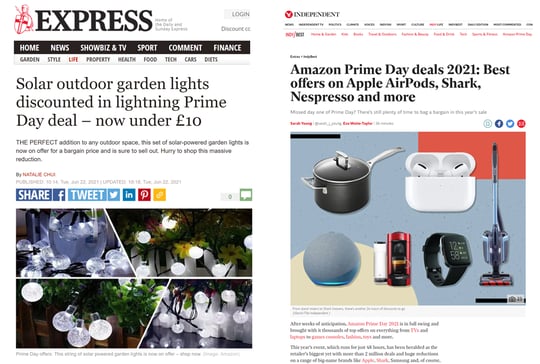 Social media a bit quieter this year — except for TikTok

The silence on stalwart social media channels was almost deafening. We saw very few brands promoting via Facebook, Instagram and Twitter as they did in past years.

One exception is the latest social media sensation, TikTok, being leveraged to build hype among consumers. We saw hashtags like #PrimeDayDealsDance and #primedaydeals2021 getting hundreds of thousands (if not millions) of views.

Some products promoted on Prime Day, such as “LED Strip Lights, TIK Tok Lights Daufri LED Light Strip Color Changing Kit” (which increased its sales rank by 1,177,600% during Prime Day, making it a top 10 winner across all categories), optimize for search by using the keyword “TikTok” in the product title. Interestingly, “TikTok leggings,” a viral sensation earlier in the year, were being promoted as a Prime Day Deal too. 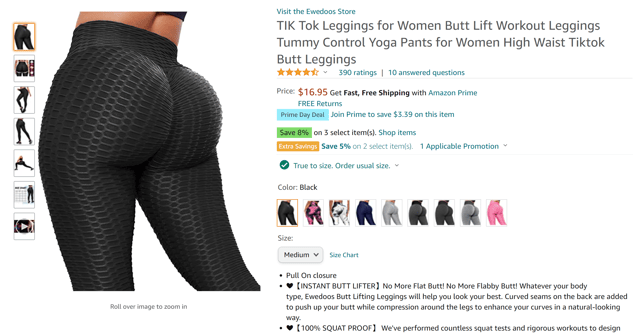 Amazon seemed to downplay the use of Amazon Live streaming a bit this Prime Day by using a much smaller video, which was buried several scrolls down the home page, versus a more “in-your-face” approach, which owned a lot of prime real estate at the top of the site in previous years. This allowed much more space to feature Prime Day deals front and center. 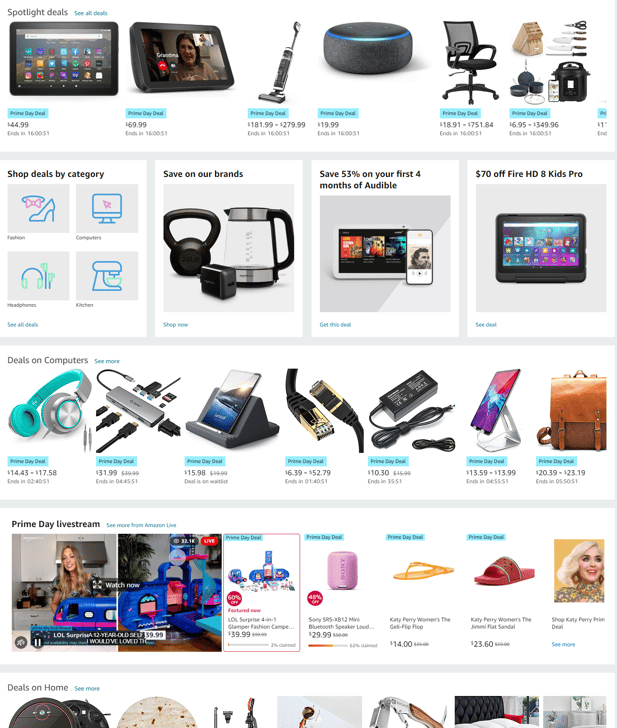 Profitero did see some evidence that promoting products via live stream, and backed by influencers on Prime Day, can work. For example:

Prime Day is an industry wide, not Amazon-only, event

Walmart, Target, Best Buy, and other competing retailers in the U.S. showed up in force again this Prime Day, hosting their own sales events to leverage the online traffic and consumer interest Prime Day generates. Good thing too. Profitero’s pre Prime Day survey found that more than a third of consumers would be seeking deals at non-Amazon retailers this Prime Day. And 58% said they’d be price checking deals on other sites before checking out at Amazon. But in contrast to what we saw in the U.S., things were much lower key in the U.K., with most of the usual suspects (Tesco, Argos, John Lewis) missing in action this year.

With so much increased activity across U.S. retailers on Prime Day, price-matching algorithms were in overdrive.

Here are ways we’ve seen retailers prevent low-ball pricing and circumvent a race to the bottom: 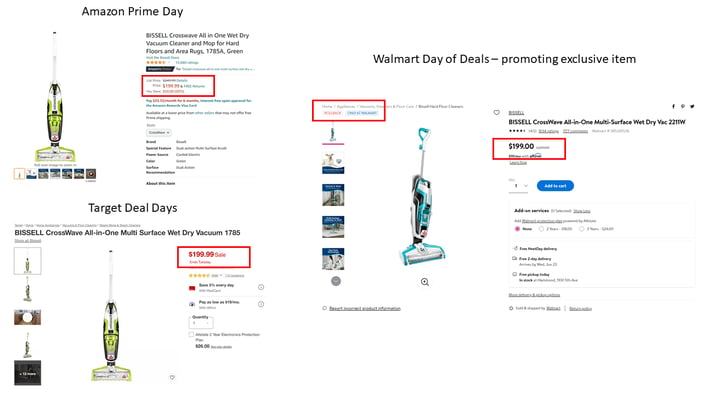 1. Differentiate product & promotions to suit different retailers. Despite Prime Day originating with Amazon, consumers are not Amazon loyalists. So be sure to choose the right channel and retailer for your product promotions. Retailers increasingly will look for differentiated assortments or exclusive items and retailer-specific promotions to avoid direct price-matching. This could be a win-win for profit margins.

2. Cover your bases with paid search & sponsorship. Prime Day “piggybacking” — i.e., leveraging another product’s Prime Day deal traffic to gain exposure for your own brand — was real this year. Between sponsored display ads, “Products related to this item” sections, and more (see Instant Pot example at right), Amazon creates many opportunities for brands to disrupt the path to purchase for competitor ASINs. The real estate to do this seems to keep growing every day. This means every offensive strategy to drive traffic to your PDPs also needs to have a defensive strategy to keep the traffic there. So, you need to buy more ads on top of your already planned ads and promotions.

3. Test & learn: Amazon Live, influencers, affiliates, etc. There are many awareness-building and traffic-driving tactics brands can use, whether on Prime Day or any other big seasonal or promotional event. The key is testing out these different tactics, and then importantly having a data analytics solution in place to measure results so you can see what works.

Which products moved up the sales ranks on Amazon on Prime Day?

Profitero’s list of the biggest gainers in sales rank during Prime Day featured several of the aforementioned major brands, along with a slew of Amazon’s own brand products — ranging from Amazon Devices in electronics to AmazonBasics in home and WAG in pet. See below.