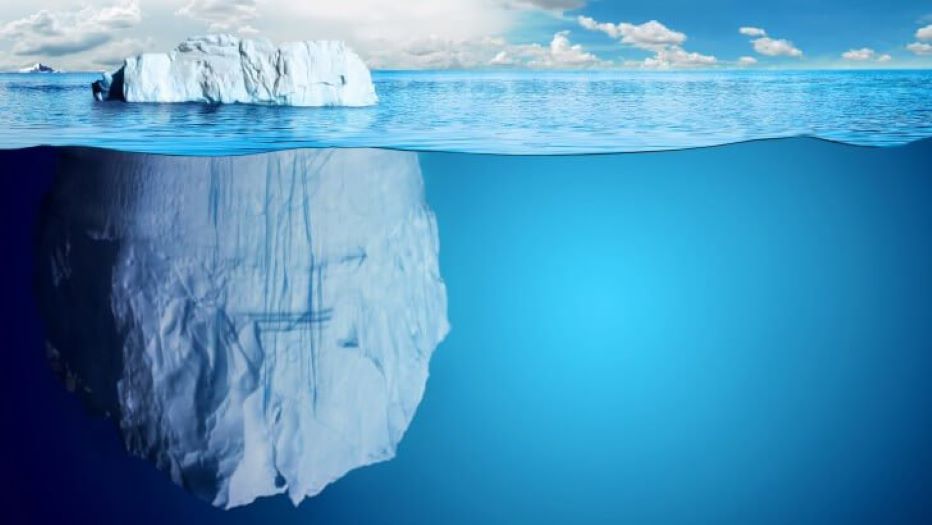 Think about eCommerce as an iceberg.

The tip of the iceberg is the direct value created by the eCommerce channel itself, i.e., the direct ROI measured in terms of sales & share the channel generates.

But beneath the surface of the water is a massive chunk that’s creating indirect value in ways that may be hard to see or measure. This indirect value comes from a number of sources, but here are three primary ones:

Let’s dissect the iceberg and its components to help you understand just how big and far-reaching the impact of eCommerce really is.

Measuring the ‘direct value’ of eCommerce

Everyone thought eCommerce was in decline when earlier this year the U.S. Department of Commerce reported that eCommerce sales had plummeted from 14.6% of U.S. total retail sales in Q3 2021 to 12.9% in Q4 2021.

An article published by The Wall Street Journal in April didn’t help matters. The article titled “The Pandemic Was Supposed to Push All Shopping Online. It Didn’t.” surmised that some “eComm retailers that rode a surge of online purchases in 2020 are now grappling with the fact that some customers have returned to stores.”

The questions on everyone’s mind became:

The short answer to these questions: Absolutely not! Doing so would be exceptionally short-sighted for several reasons.

1. eCommerce sales have been upwardly revised

The restated figures show that eCommerce actually captured 14.3% of total U.S. retail sales in Q4 2021, substantially higher than the 12.9% originally reported, and more in line with previously reported eComm sales. eCommerce is well on its way to closing in on $1 Trillion.

2. eCommerce remains on a growth trajectory

Experts forecast eCommerce will continue on its upward growth trajectory, and the figures are pretty eye-opening. Fast forward three years: eMarketer projects eCommerce will represent 20% of total retail sales in the U.S. (yes, $1 in every $5 will be spent online); nearly 40% in the U.K.; and more than 50% in China. Bad times are ahead for any company considering pulling back on investments by underestimating the secular shift to digital that’s been underway for some 20+ years. 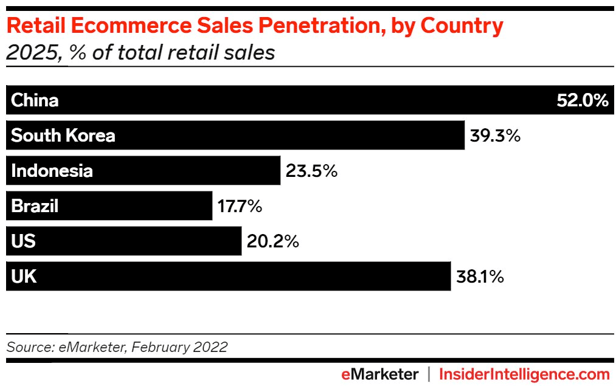 3. Retailers are leaning in heavily on eCommerce

The writing’s been on the wall for awhile. Retailers are rationalizing their store bases and reducing their physical footprints to instead focus more heavily on building eCommerce capabilities. Today, nearly every retailer has an online offer, many with their own marketplaces. And curbside pickup locations and local home delivery has been expanding.

Meanwhile, stores continue to close down. Some examples:

Measuring the ‘indirect value’ of eCommerce

Despite the escalated growth of eCommerce in recent years, brands can no longer think, measure and invest in terms of just “eCommerce.” The impact is much greater than that. Thinking this way requires a change in mindset, taking into account the many ways digital is influencing your business and expanding your brand’s sales potential.

Here are three primary things to think about:

“Digitally influenced sales” take into account all transactions where a consumer has had a digital touchpoint along their path to purchase, regardless of where the sale ultimately happens — i.e., online or brick & mortar. It gives brands credit where credit is due for all the digital shopper marketing that engages consumers during their shopping journey. And in today’s increasingly omnichannel world, the lines are way too blurry to separate brick & mortar sales from digitally influenced sales.

How digital and physical touchpoints interconnect throughout the shopper journey

Consider these stats, which clearly support the interconnectedness of physical and digital: 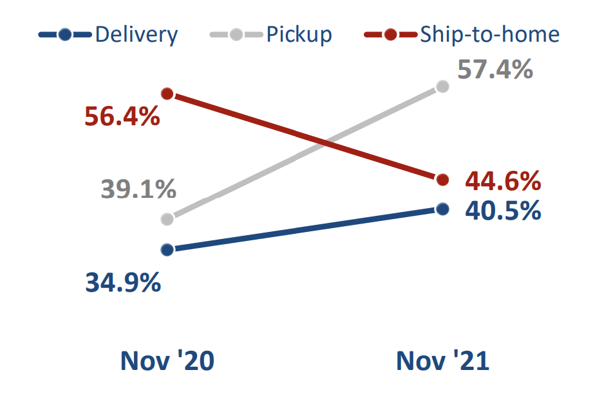 Brands also have to consider that the shoppers you attract online may be different than your typical brick & mortar shoppers. So, it’s important to think about your digital investments as part of a broader brand expansion strategy.

Online shoppers tend to skew younger – they are a mobile-first digitally native generation. Therefore, winning sales online with new, younger shoppers – especially as they move into their high purchasing power  and household formation – could be worth substantially more than your core B&M demographic from a future potential lifetime loyalty value.

Primary shopping methods used among consumers worldwide in 2021, by generation

Shopper loyalty online tends to be stickier than offline. What this means is that shoppers who buy a product online tend to be more likely to buy it again based on past purchases.

Globally, 49% of online grocery shoppers use the repeat purchase option, according to the EY Future Consumer Index. According to U.S. online shopping platform Instacart, after an initial purchase or two, customers are more likely to look for items in their purchase history than by using the search function. By their 10th order, 25% of conversions come from the “Buy It Again” section on Instacart.

It’s these kinds of stats that underscore the importance for brands to get in the cart or on a shopper’s favorites list early, and then reap the rewards of lifetime value.

So what, Now what?

Contact us to learn how Profitero can help set up your team to better monitor and manage your digital shelf at scale across all your retailer partners.