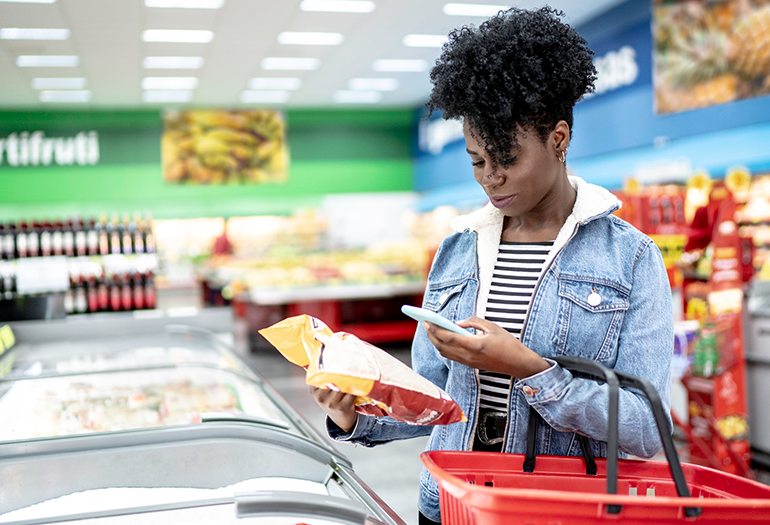 eCommerce is taking off like a rocket ship, but many brick & mortar teams are still skeptical about the need for digital investment. It’s easy to understand why. Change is scary, resources are limited, and incentives are often not yet in place to make brick & mortar teams care.

This resistance is a barrier every eCommerce leader faces on their road to advancing digital maturity, and one that is often created by the eCommerce leader. It starts with your vocabulary. The very word “eCommerce” often creates an adversarial relationship with brick & mortar teams who view it as a competing channel, rather than as an enabler of the entire shopping path to purchase. And pointing to “eCommerce sales” and “eCommerce penetration” as success metrics only fuels the problem by leaving the brick & mortar teams out of the picture.

We are in an era where teams are saying, “but eCommerce is only X percent of our business and it’s cannibalizing my brick & mortar sales,” and questioning more digital investment. This is one of the biggest myths being busted.

The truth is: It’s not easy to separate the impact of eCommerce and brick & mortar retail sales. The lines are getting too blurry. So, we need language and metrics that recognize this blur. It starts by breaking down the idea that digital investments only benefit eCommerce sales, and showing brick & mortar teams that all sales are in fact “digitally influenced” — a term called “digitally influenced sales.” Making this subtle vocabulary shift moves eCommerce from being thought of as a competitor to an enabler and money-maker for all.

What do we mean by ‘digitally influenced sales’?

“Digitally influenced sales” take into account all transactions where a consumer has had a digital touchpoint along their path to purchase, regardless of where the sale ultimately happens — i.e., online or brick & mortar. It gives brands credit where credit is due for all the digital shopper marketing that engages consumers during their shopping journey.

As visualized by IRI below, there is an enormous amount of interconnectedness between digital and physical retail — many of which are unaccounted for if you look at eCommerce-only sales.

How digital and physical touchpoints interconnect throughout the shopper journey

Why is it important to think in terms of ‘digitally influenced sales’?

Fair warning, there is potential for territorial battles regarding which team gets credit for in-store vs. online sales, and who owns what (e.g., omnichannel responsibilities). At the end of the day, though, it’s in the best interest of both the brick & mortar sales teams and eCommerce teams to want to grow digitally influenced sales overall. Why?

So, just how much of your sales are digitally influenced?

Research from Forrester suggests that nearly two-thirds (62%) of all sales are now digitally influenced (taking into account both online + offline sales, which had a digital influence element). This is up from 49% pre-pandemic. On a category basis, data from Invespcro.com suggests digitally influenced sales range anywhere from 46% for grocery to 69% for Electronics. 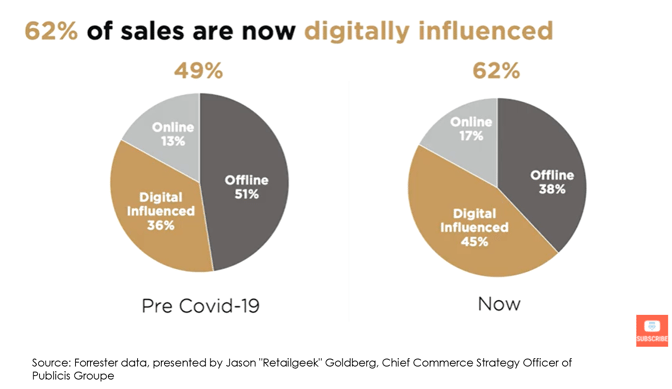 Specific to your own brands, however, digitally influenced sales are hard to measure and attribute sales to appropriately. A key reason for this is the ambiguity that exists around how “eCommerce” and “digital” are defined. There are no set industry standards; different retailers and brands apply different definitions.

Take for example, the surge in click & collect or BOPIS (buy online pickup in store) sales in recent years, which especially skyrocketed during COVID. The vast majority of BOPIS/click & collect orders are fulfilled at the store level.

So the question is: How can I get my organization to buy into this idea of “digitally influenced sales?” Here are three things we see our clients doing:


Contact us to learn more about how Profitero can help your brand accelerate its digitally influenced sales.